Arriving to Bolivia is a pain in the arse if you’re Singaporean or American. You can get a visa on arrival but it will cost you US$100 and you need a passport sized photograph, passport, credit card and your flight details out in copies. If you’re American, you need US$160 with the items. Other countries, please check the website before you arrive. 😂
My first stop in Bolivia was La Paz. La Paz is the highest capital city in the world. Actually, their real capital is Sucre but their president sits in La Paz so technically, it’s the capital. Everyone sees La Paz as 0km and all the other cities’ distance in Bolivia are pegged to that. 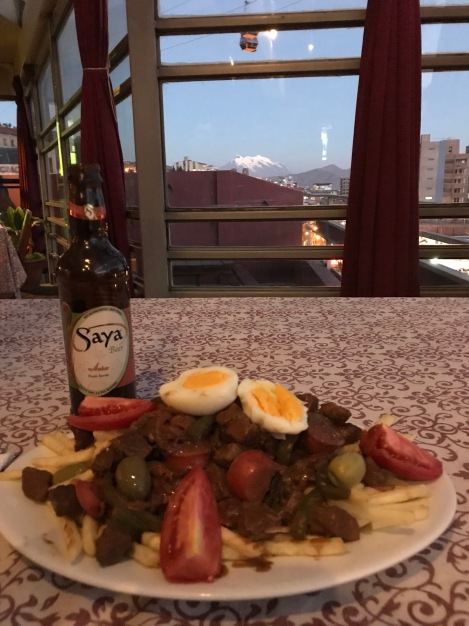 Pique Macho with Bolivian beer and the view from the roof top bar of my hostel.

The orange Teleferico with Mount Illimani at the back

La Paz is all that you read about. It’s nestled in a valley between mountains and there is constant pollution from the many old cars that run on diesel. In fact, it’s so polluted I had sinus problems the whole time I was there. If you’re lucky like me though, you get to see the mountains on a clear day despite the pollution. My hostel tells me sometimes they can’t see the peaks of Mount Illimani because the pollution is so bad.

In La Paz, you have to be careful with the traffic. You don’t have right of way. The cars do 😂 that’s why they have zebras that help pedestrians cross the road all over the city. Apparently, a movie was made about them. La Paz doesn’t have an underground system as they are very hilly, so what’s the next best things the Teleferico, which is the cable car. They have 4 lines and are going to build more to connect the city. It only costs 3 bolivianos for a ride on it and it’s the fastest way around. Trust me, I’ve tried taking the mini van which is the main form of transportation and it’s 2 bolivianos but the town is so crowded it took me 20 minutes just to get to the Teleferico station 😂 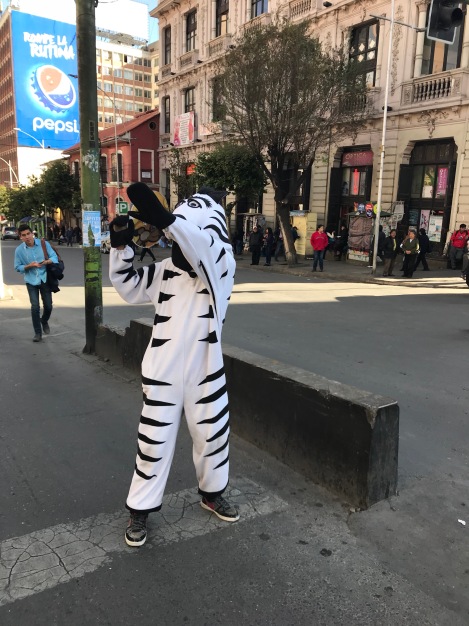 In La Paz, you have to go to the witches market. There, you will see everything you need for good magic and black magic including fetuses of Lama, pigs, alpaca and dogs! Black magic is big business here and if you happen to be a victim, they make good money too to undo the harm done to you. Just being here is an experience but beware of pickpockets. I bought a good luck charm in the form of a garlic and it’s in my bag. So far, it has kept me safe from harm. 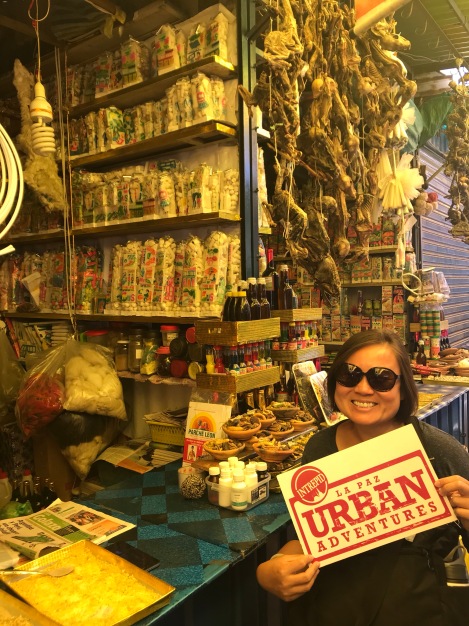 Can you see the animal fetuses above my head?

La Paz is quite a dangerous city, I should warn you not to go out after 8pm. Even my hostel tells me not to talk to strangers or go out at night. A guy at the hostel was mugged of his phone and wallet walking back to the hostel at around 11am. In the day time, everything seems ok except you should flash your phone or money around and you should always keep your bag with you.

Ok now the nice parts. The city is beautiful especially at sunset. There is something magical about watching the sun set behind the mountains and having the snow capped mountains right at your doorstep. Take the red or orange Teleferico up during sunset and you won’t regret it.

The museum of San Francisco church is worth a visit. And if you want to know more about Coca, visit the Coca Museum. 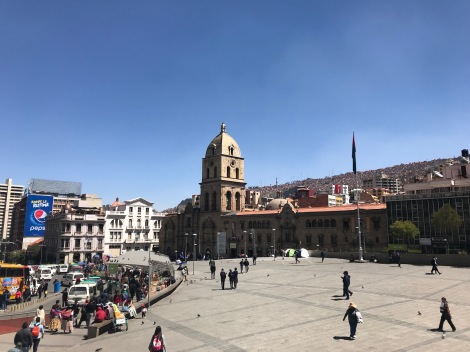 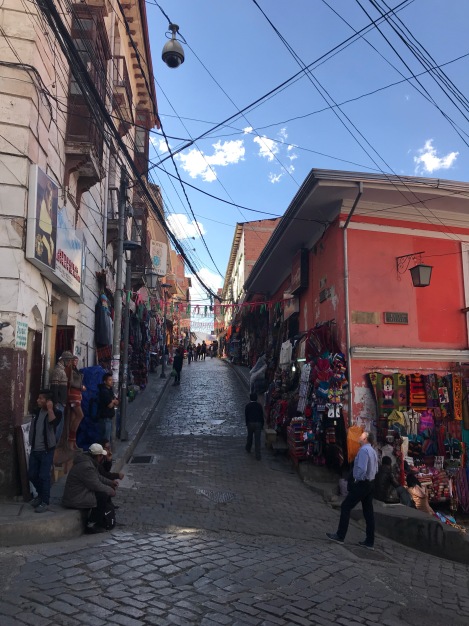 La Paz has a very huge market where they sell everything from fruits, meat, flowers, oil, coca leaves, herbs, you name it, it’s there. And it’s also huge.

I did a walking tour with Urban Adventures and the guide was very good. With her, u saw the most dangerous prison in La Paz. The San Pedro Prison. Walking along the prison, I was very lucky to see cocaine fly out of one of the holes and a man running to pick it up. My guide said I was the second person she brought along who saw it. She also said he will be selling the cocaine in the park next to it. The prison houses 4000-5000 people and the inmates are all men. Even in the prison, they are segregated to different classes.

The president’s office at a very nice square and it’s definitely worth a visit.

For food, eat the Saltena from Confiteria Gaita, which is like our curry puff but it has sauce inside. It’s so delicious I had 2, a chicken and a beef. The Pique Macho is typical Bolivian food and it’s basically loaded fries and it’s calorie loaded and I love it with lots of their spicy chili  sauce that has a good kick! They also have quinoa soup that’s amazing.

The main reason why I’m in La Paz was because I wanted to visit the Uyuni salt flats and the desert. To get there, you can take an over night bus from La Paz or fly in the early morning like me!

This adventure takes you up to 5000m above sea level and it’s so wonderful. I took the 3D2N tour with Red Planet expeditions and they were very good. You sit in a 4WD with 4 other people and the guide and driver and you make very strategic stops daily. I was very lucky my guide seems like a MTV videographer and photographer and has a knack for taking great. shots. He also has props like the dinosaur and the pringles bottle. I won’t write much because you should just let the photos speak for itself. It is a wonderful place!! The desert, red lagoon with flamingos, the Geysers and the salt flats are not to be missed if you’re in South America. It makes all the trouble for the visa worth it. And the group of people I was in the 4WD with are amazing! The cost is USD210 and you get full meals and very basic accommodation.

​​
If you are prone to altitude sickness, buy lots of coca leaves and Chew them or drink them as tea. Red planet provides them so if you booked with them you’re gonna be chewing it the entire time. Drink lots of water and snack along the way and try not to drink any alcohol. I was only sick once because the views blew me away and I think I was already acclimatized to altitude in Cuzco.

​​​
​I ended the tour in San Pedro de Atacama Chile. You can also choose to end it back in Uyuni and the same vehicle will bring you back. 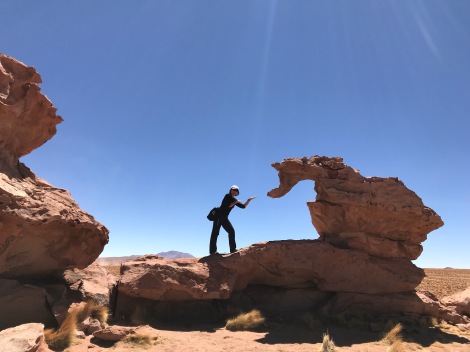 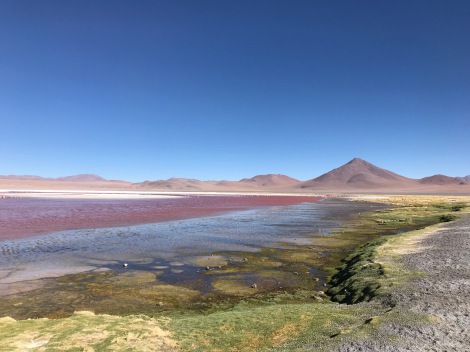 And that’s amazing Bolivia for you. The best road trip I’ve had this year! And I didn’t even have to drive 😂