Today, I joined my group for the start of the tour with Tibet Vista. A couple from Kuala Lumpur, 2 ladies from San Diego and a Chinese American from San Francisco made up my posse

Tashi is now accompanied by our driver Tuesday. He said his actual name in Tibetan very softly and shyly and we all tried and failed so Tashi said please call him Tuesday 🤣 and so we did. Actually on hindsight, Ming Ma isn’t that hard to pronounce and we were able to call him that from day 2 onwards as he became more chatty. I am so glad I joined a group of 6 and In the bus, one of the ladies from San Diego actually asked the ‘Why?’ questions instead of me. I felt like it’s gonna be a fun 8 more days!

First stop we did was Drepung monastery, the largest monastery in Tibet. It used to house about 10000 monks and now, it’s a lot less, maybe 800? It’s called Drepung because from below, it looks like there are heaps of rice on the mountains. And Drepung literally means heaps of rice. I asked Tashi why the monks are reduced.

Tashi: Monks they sometimes fall in love, they miss the city life, so many reasons!

Tashi said his brother was a monk too for a few years, then he fell in love and got married.

Before we hiked up the mountains, we had to pee as Tashi said the next toilet is at the top. OMG was the pee an experience in itself. The toilet had no doors. It was a long drain and they made dividers up to the height of our thighs, meaning no privacy. You had to squat along the drain to pee or poo into it. The most interesting part was, there was shit on the dividers, the 4 walls around you, and I wonder how people can poo on the dividers??? Imagine if you fell to either side, or your bag touched the dividers, you would smell of shit the whole day. Thankfully, no such accident happened and we went on our way.

Me: Tashi, why the toilets here so bad?

Tashi: it’s a monastery, not a hotel ok?

Me: Are the toilets up there all gonna be the same?

Tashi: You will find out when you go up. (Big smirk on face)

3/4 up the top, Tashi stopped us near the toilets because that’s where you can see the whole of Lhasa town. The stench was really bad but Tashi loves torturing us by explaining everything about the monastery to us near the toilet. Everyone in my group was giggling as we had our scarfs to our nose.

Tashi: why are you all doing this? (He does the action of his hat to his nose)

Tashi: it’s all in your head. Ignore it and enjoy the scenery ok? And my story!

All of us burst out laughing and had no choice but to hear him finish the part about the Tibetan king, the Lamas and the 4 different sects of Tibetan Buddhism. 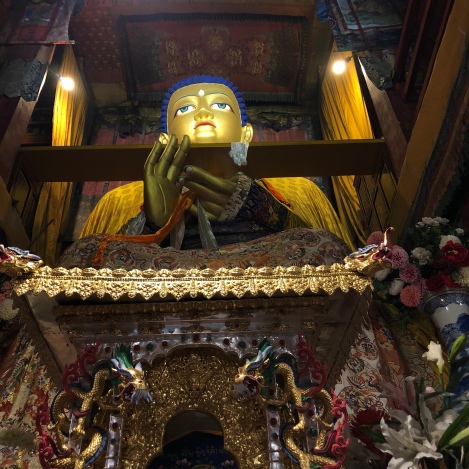 Next stop was Sera Monastery, built 3 years after Drepung in 1419. It has 3 halls and 33 houses and it’s the second largest in Tibet. The highlight of this monastery is the sand mandala that’s really beautiful and the daily Monks debate at 3pm, except Sunday so they can read up more if they lost he whole week 🤣. 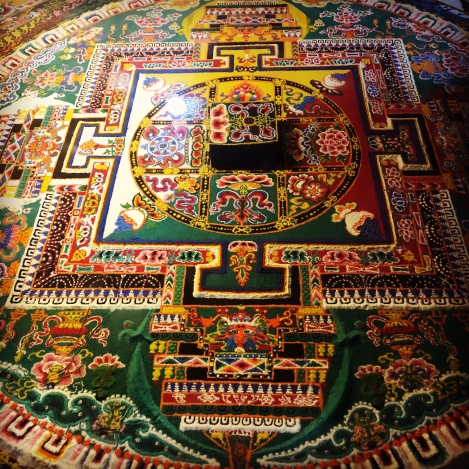 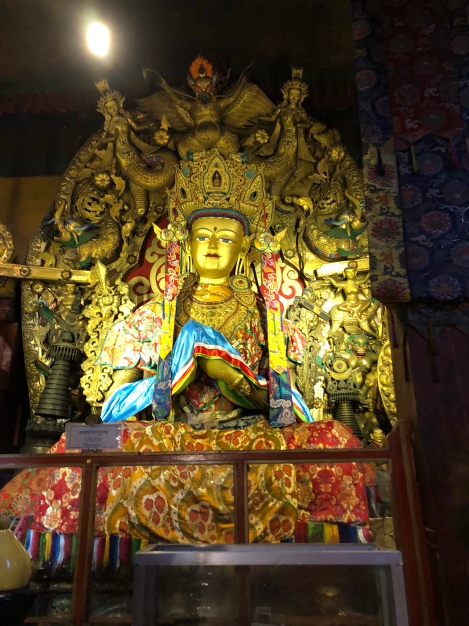 The next day, we visited the most visited and holy attraction, the Potala Palace this is the winter palace of the Dalai Lamas where they stayed and held important political meetings before the cultural revolution in China. This very large residence was built in the 7th century and is divided into the red and white sections, where you could visit. Tickets have to be gotten through an agency because they only allow 2000 registered visitors a day and you have to be accompanied by a guide. You can only see and feel the magic for 50 minutes while inside. Yes, they’re very organised like that so it’s not as crowded. The Buddhas, relics, murals and sutras are very well preserved and are originals and thus, very precious. 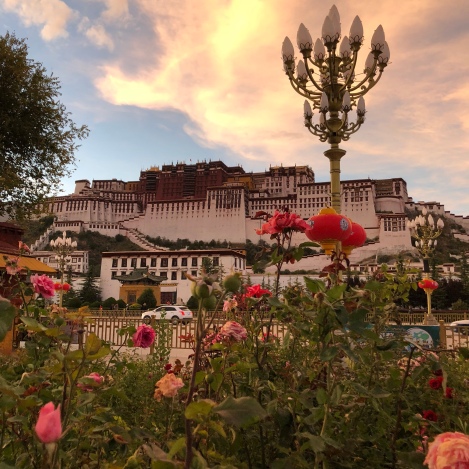 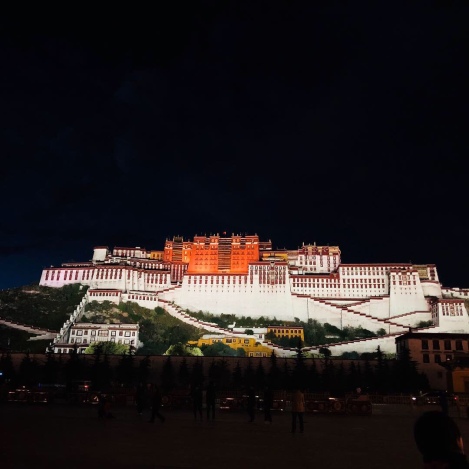 I recommend taking photos in the evening as it lights up and walking clockwise at sunset as it’s supposed to be a very good pilgrimage.

Buddha was born about 2500 years ago and they house the original statue that was made when he was alive at 12 years old and housed it in Jokhang.

Jokhang is actually one of my favourites because the whole temple is crowded day and night on the outside with devotees prostrating in the day time around it or just in front of it. The Tibetans do bring praying to another level and it’s really a sight to behold. You will again need a guide to enter with you and the tourist permit. The inside is very crowded but it’s definitely worth a visit and you will need the guide because they will explain everything to you so well. The Buddha of course is beautiful. All other buddha faces around the world replicates this one. I felt peaceful looking at the statue and of course, no photos inside. 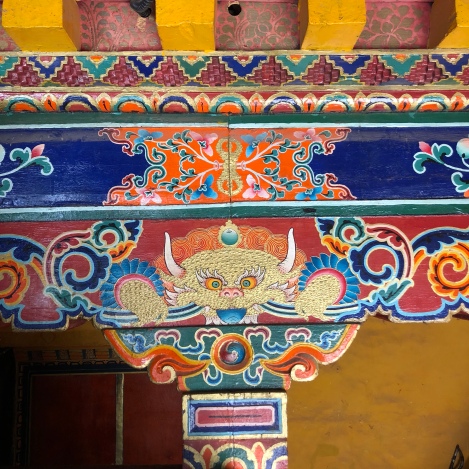 The Jokhang Temple is built in the centre of old Lhasa so it’s amazing to walk around day or night. There are many shops and restaurants around it. In mandarin, the temple is called Da Zhao Shi.

Another place worth visiting is Xiao Zhao Shi which is the Ramoche temple which is built just about 10 minutes walk of Jokhang. It was built by Princess Wenchang and it houses the buddha’s statue that’s made after his face when he was 8 years old. Both this and the one in Jokhang are the oldest in the world. This is a smaller temple and I really enjoyed walking around it clockwise as it’s frequented by more locals than tourists. The tours don’t cover this one usually. Because I came earlier than my group, I had the opportunity to visit this beautiful place and got my singing bowls blessed by the monk there as well. 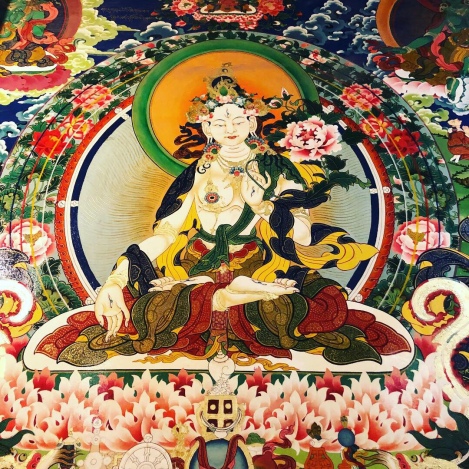 Another monastery they I liked is the TsamKhung nunnery. The only nunnery in old Lhasa. There is a special cave inside where the Tibetan King Songstan Gampo in the 7th century mediated to pacify the dangers of floods of the Lhasa River. Ever since the temple was built around this cave, Lhasa river stopped flooding the villages. Isn’t it amazing? I liked the fact that it’s small and again, not too many tourists. 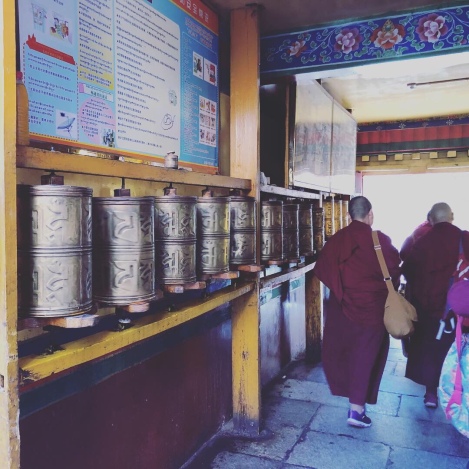 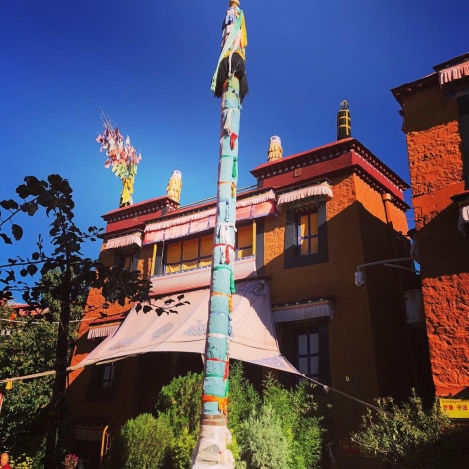 On my 7th day of the tour, we drove down to Xigazê and visited the 6th largest monastery in Tibet. Tashi Lhunpo was built in 1447 and houses the important seat of the Pachen Lama, similar to the Dalai Lama but not exiled. It houses the statue of the largest gold gilded bronze statue of the future Buddha Maitreya and it’s beautiful.

I liked this one a lot too because it’s like a village. The premise is huge and the buildings so beautiful. There are also more monks walking freely and they are friendlier with photos.

And that’s it! My round up of the monasteries that I visited in Tibet. As a non Chinese citizen, you will still need to register with a tour agency and can’t really visit the monuments alone as you will need a Tibet travel permit to travel around and also check into your hotel. I booked mine with Tibet Vista through tourradar.com and if you want a discount, please use this code!