I was very fortunate to have a friend and her family staying in Berlin. Thus, I didn’t do much research for Berlin and all I did was ask her to show me the Berlin she knows. She was older than me, in her 50s, and thus, she asked her nephew to also show me the nightlife of Berlin.

Berlin was everything you read about. The grimy dirty streets, the graffiti filled walls, the tumultuous history it had, how it was divided, then united, the amazing party scene that never sleeps, (People here party from Friday or sometimes Thursday night till Sunday morning) and did you know that they invented the curry wursts and perfected the Doner Kebab? Well, neither did I until I was told and tasted both. They were very good indeed.

My first stop in Berlin was the Reichstag. You’ll have to give your full name and date of birth to gain entry. My friend did it for me and she was smart to book the cafe that was there instead of the normal entry. That way, you can enjoy your tea time first and then walk the circling slopes that lead to the top of the dome of Reichstag. Because Berlin is pretty flat, getting up to Reichstag already gives you an amazing panoramic view of how the city is. Of course the cake and the tea was very delicious too. I was very lucky to see a rainbow when I was there but my friend says rainbows are common in Berlin as the weather is very unpredictable. 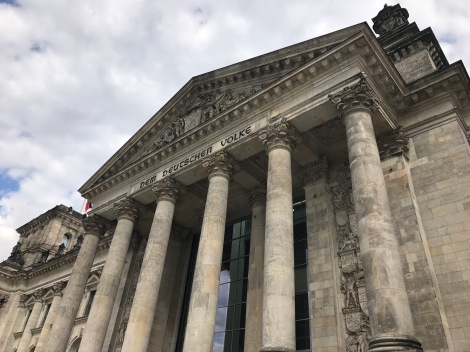 The Reichstag, remember to register yourself else you can’t visit!

Next up, I headed to Brandenburg Tor. This is a huge gate and it’s an 18th century Neo-classical monument in the city center. You can’t miss it because it is so imposing and HUGE and it’s THE Berlin sight according to many travel guides. Nearby, I headed to the Jewish memorial and it’s made up of different blocks with different heights. Large groups of people are here but they disappear due and appear again. If you studied history, this brings about sadness as you think about the murdered Jews in Europe during the Nazi Regime. Children play hide and seek here but it was very reflective for me to just stroll along it and initially I thought the dead Jews were buried here as they resemble tombs.

Hide and seek in the Jewish memorial

A memorial to honor the dead just outside Reichstag

A short walk from the Tiergarten is the Sony Centre. This place is a huge entertainment complex. But look closer and you will see there are remains of old buildings embedded within the new. This part of Berlin is really special because it’s all rebuilt and clean and it looks expensive as all the branded hotel chains are housed nearby.

Bits of the Berlin Wall near Sony building

In the evening, I headed to Alexanderplatz and if you fancy, you can jump off a building, with ropes of course or head up the TV tower to see the panorama of Berlin. We also drove past Check Point Charlie and it was one of the places where you can cross from East to West Berlin. You can take photos with the fake soldiers there for a tip. 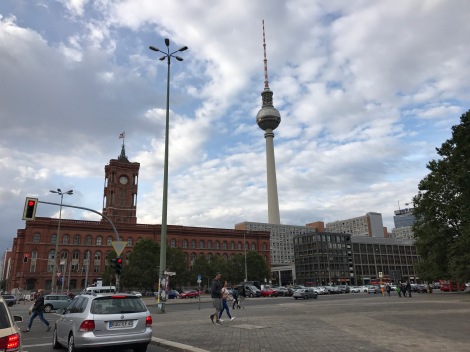 The TV tower in Alexander Platz. A common meeting place for Berliners

Meeting up with my friend’s nephew and his friends was a great insight into how Berliners spend their days and nights and also, how much they love their city. I met friends from Poland, France, Russia and other parts of Germany who have now called Berlin their home and they love it. You can see the passion in their eyes when they talk about Berlin. They said Berlin is cheap to live in and it’s the only place where you can do anything at anytime and they were right. We chatted and drank till 3am and we all took the crowded U-Bahn or bus back home. The bar bill for my 4 drinks came up to 10 euros. Food in Berlin is really affordable. You can get a decent meal for under 10 euros and if you have the kebabs or curry wursts, it’s under 4 euros. I can see why people love living here, it’s affordable and convenient and liberal. My friends calls Berlin poor. Berlin’s salary is 20% less than other parts of Germany, which explains the low cost of living. However, they are also facing a property crunch with rising real estate prices. Berlin is also extremely sexy and liberal. You can dress up as anything you want (We laughed at 2 girls in a 70s disco get up), or not dress at all (naked man walking out from a lake in the homosexual park! I was in the car when I saw him)   and it’s only a crime if someone complains about an indecent act. 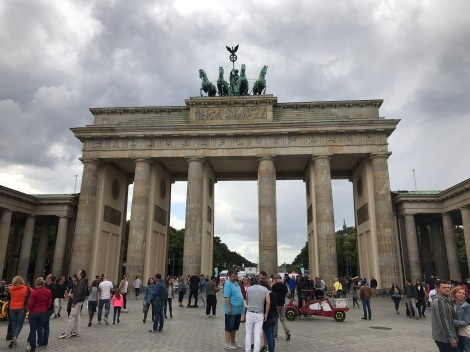 Berlin has its very pretty bits. Take a stroll along museum island in the evenings and it becomes so romantic. It’s Unesco as well! If you want to visit the museums, do go in the day as they close by 6pm. The Berlin Dome and the synagogue is around the area. The charming Hackscher Hof with cafes, restaurants is nearby. The streets of Unter Den Lindon is a pretty long street with pretty buildings, kinda similar to Champs Elysee in Paris.

The Berlin dome. Almost All the domes are churches. 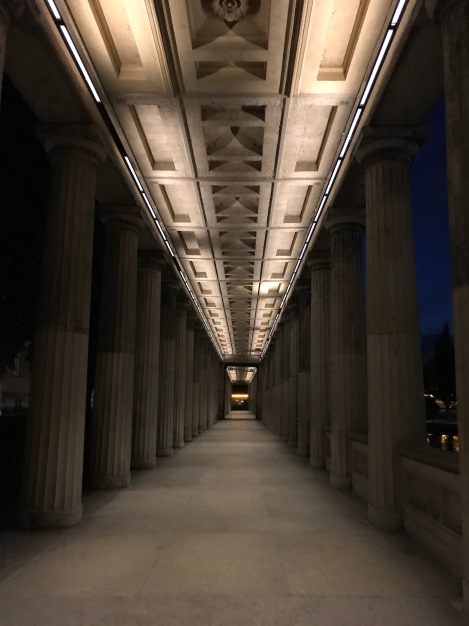 The museums on museum island

My prettiest bit of this city was the Berlin Wall. The art filled walls at the east side gallery is a must do when in Berlin. Reading all history books will do you no good if you don’t walk along this wall and take it all in. Not far from the Berlin Wall is the Oberbaum brucke, which is a moorish looking bridge and when I was there, there was an open air art gallery and live music all around. It was so atmospheric and cool!

The Kaiser Wilheim memorial church is a semi restored church to serve as a reminder of WWII. The roof of he cathedral is open and it seems like it’s in ruins. You can see the history within the church and also photos of how Berlin used to look like pre war. I loved how the new church beside it is a beautiful blue inside and that is an operational church with services held. 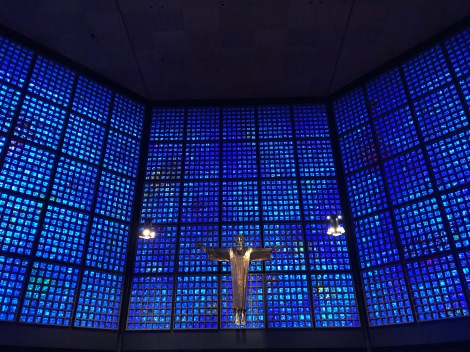 You have to head inside to see this. It’s just beside the ruins

The purposely half unrestored cathedral to serve as a memorial

If you don’t have a car, Berlin is the easiest way to get around in public transport. The S bahn, U bahn and the buses are great. If you do not want to pay for the tourist bus, take 100! This bus brings you to all the attractions I mentioned. And if you make a Berliners friend and he has the travelcard, he gets to bring along a friend for free after 8pm on weeknights and weekends. I got to travel free on the bus at night as a random guy said he’ll tag me along when I wanted to pay for my bus fare at 3am. How nice!

After Berlin, I headed to nearby Potsdam and my road trip begins. Potsdam is only a short 40 minutes drive away from Berlin and it’s a remarkable difference. 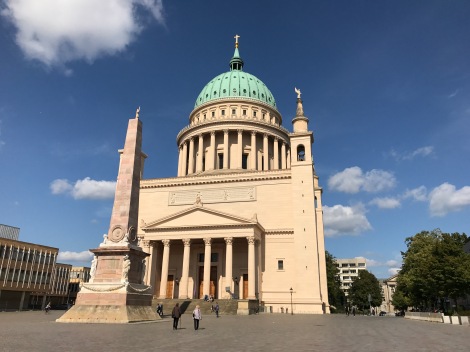 Potsdam looks like the perfect advertisement for Germany. The buildings in the dutch quarter and near the St Nikolas church look so perfect and of course, how can you miss the Unesco recognized Sanssouci park and King Frederick the Great’s summer palace? I strolled along Potsdam in a day and it was the perfect sunny day which made me feel like the universe conspired to make this place feel so starkly different from the rainy cloudy Berlin. 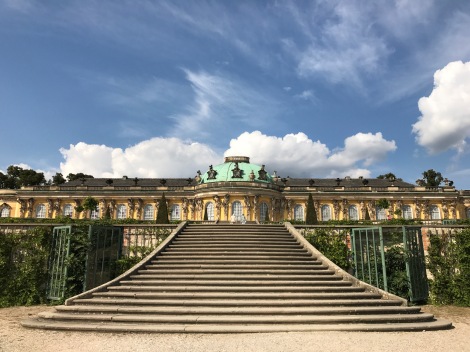 The Unesco Sanssouci palace and park

It takes about 4 hours to walk the Sanssouci park and the surrounding palaces. As it was Monday, only the Neues palace was open, it closes on Tuesday. The Sanssouci palace was closed when I was there but the gardens were a fantastic stroll. The many statues and huge manicured gardens and fountains and the steps leading up to the palace was pretty darn amazing. There’s also a windmill to boot!

The gardens of Sanssouci

If you have more time, do head to Cecilienhof which I missed as it’s Unesco too.

The old town has a few beautiful churches and the Dutch quarter, with its red bricked architecture is filled with cool cafes and art shops. I had my meal here before I headed to walk the large Sanssouci grounds. If you fancy, there is a film museum near the St Nikolas church at the Alter Markt, the old market square. Just make sure you don’t go on Monday.

I really really love Berlin because it’s raw and real and I was lucky to have friends show me around. Potsdam is very pretty but I felt like it was staged. But I guess you have to do both to experience the duality.  Next up, I take the roads to Rhine and Moselle, the romantic wine region!